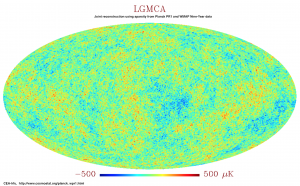 Using both WMAP and Planck PR1 data, we have reconstructed an extremely clean CMB map. A more detailed description can be found here. The same method has been used on Planck and PR2 data (Bobin et al, 2016). We have shown that large scale analysis does not require masking anymore when using our estimated CMB map (Rassat et al, 2014), and that CMB large scales are compatible with the standard l-CDM cosmological model (Rassat et al, 2014). More details can be found here. Finally, we have estimated the primordial power spectrum using our PRISM method on both WMAP9 (Paykari et al., A&A, 2014) and Planck data (Lanusse et al., A&A, 2014) and we find no significant departure from the Planck PR1 best fit. 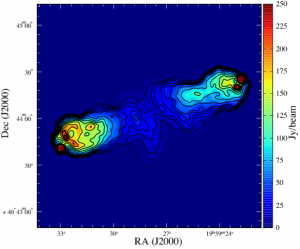 Sparse recovery allows us to reconstruct an image with a resolution increased by a factor two (Garsden, Girard, Starck, Corbel et al, A&A, 2015).  This has been confirmed by comparing two images of the  Cygnus A radio source, the first from the LOFAR instrument and reconstructed using sparsity, and the second one from Very Large Array at a higher frequency (and therefore with a better resolution). The contour the VLA image matches perfectly the high resolution features that can be seen in the LOFAR color map image. More details here.